California Board of Legal Specialization Immigration and Nationality Law

Hector R. Ortega graduated  from the University of California in Los Angeles in the year 1999 with a bachelor’s degree in History. In May of 2004, he obtained his Juris Doctorate from Loyola Law School of Los Angeles.

While attending law school he  was a student intern at  a non-profit organization serving the immigrant community of Los Angeles. It was during this student internship, seeing the direct and immediate effect of immigration laws that Attorney Ortega decided to practice in this legal field. He continues to volunteer and serve his community pro bono on a weekly basis.

Attorney Ortega has been in private immigration practice since the year 2005, forming Ortega, Canossa & Associates, PLC in 2007. He is  an active member of the California State Bar, and has represented hundreds of clients before the U.S. Citizenship and Immigration Service, and the Executive Office for Immigration Review. He currently focuses his practice in the handling of specially complex cases, he preparation of legal arguments before the Immigration Court, the Board of Immigration Appeals, and the Ninth Circuit Court of Appeals.

Outside of Ortega, Canossa and Associates, PLC, attorney Ortega enjoys the companion of his close knit family.  He is an avid reader of science-fiction and Stephen King novels. He appreciates rock concerts, baseball games at Dodger Stadium, and the amity of his two pet Boston Terriers. He likes to travel and learn of new customs and cultures.

" We seek to preserve our client's rights to remain in this country.  In doing so we keep families together. " 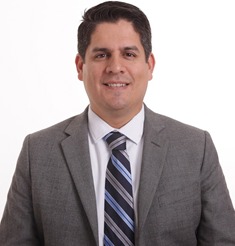